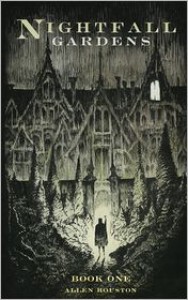 “Only later, when she was locked away at Nightfall Gardens, would Lily realize that the moment she saw the man with the wolf’s-head cloak was the beginning of the end of her old life.”

Fourteen year old Lily has dreams of being an actress on the famous stages of Paris.  Her brother Silas is writing a play.  Theirs is a family of the stage, their parents trying to make a go of a run-down theater in New Amsterdam.

Lily is a bit shallow and vain, Silas a bit of a dreamer, but as the story unfolds they both show they have more spunk and backbone than we might have thought.  I liked them both.  Silas especially is caring, empathetic and loyal.  Lily isn’t as superficial as she comes across in the beginning.  And they care about each other, which is nice.

This book starts out in New Amsterdam, which would be New York about 100 years prior to the Revolutionary War.  I had thought it had a bit of a Victorian era feel, with carriages, etc.  I was only off by a bit there. :D

Soon though the story moves on to Nightfall Gardens, the mysterious, spooky and exceedingly strange estate of the children’s dying grandmother.

Their uncle tells them, “I’ve done my duty keeping the dark at bay for 13 years, but it draws closer with each sip of Deiva’s faltering breath.  Only a Blackwood daughter can keep the final night from coming.”

We get our first view of the house, “The ancient-looking palace rose out of nowhere to dominate the landscape.  It was protected by a high stone wall that stretched to the horizon.  He saw a jumble of towers, spires, and walls of windows that soared toward the heavens.  Statues of gargoyles dominated the eaves.” On the Blackwood estate it is always dusk or dark, never day.  The gates only open to the outside world once a year for just a few days.

The house is strange, rooms move around, there are strange noises and sights.   There are dangers for the unwary.  The grounds, with the gardens, are strange and dangerous as well, full of odd, and bloodthirsty creatures determined to end the Blackwood line.

But, I wouldn’t classify it as firmly middle grade, in spite of the ages of the main characters.  It’s more complex in story and in writing than is typical for middle grade books.  I’d recommend this from older middle grade to young adult readers, and even adult readers who can enjoy stories with young protagonists.

The story incorporates the myth of Pandora in an ingenious way, making it family history rather than myth.  There are plants with magical properties such as healing or protection from evil creatures.  The use of Greek myths, folklore, and other strange creatures, was reminiscent of Harry Potter.  Although the plot is very imaginative and original and not anything like Harry Potter.  I was very impressed, I can’t remember reading a book with a similar plotline.

A dark fantasy, also may appeal to fans of ghost stories, haunted house tales, and dark fairy tales.  This is not a ghost story or fairy tale, but some of those elements are here.

Fair warning, the book does end with a cliffhanger.

I’ve already purchased and started reading the next book in the series.