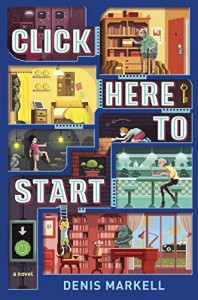 Ted barely knows his great-uncle when he visits the dying man in the hospital.

“I have a flashback for a movie I saw where a guy laid out like this had a monster burst out of his chest and jump on someone’s face.  I’m not saying I expect that to happen here, but hey, it does go through my mind.”

During the visit Ted’s great-uncle (who is also Ted), asks him about his love for computer games, and escape-the-room games in particular.  Turns out the younger Ted not only enjoys these games, but is very good at them.

“Wait. Is a real, live adult person actually asking me details about the games I play? This is unheard of.”

At the end of the visit Great-Uncle Ted gives Ted a strange message, insisting on a promise.

“THE BOX IS ONLY THE BEGINNING. KEEP LOOKING FOR THE ANSWERS. ALWAYS GO FOR BROKE! PROMISE ME!”

Ted doesn’t understand what all that is about, but as his great-uncle falls into exhausted sleep he gives his promise.

This sets Ted off on a path of mystery, suspense and puzzles.  Aided by his friend Caleb, and reluctantly by the daughter of his dad’s boss, Isabel, Ted sorts through the junk filled apartment his great-uncle left him in his will.  The will mentions treasure and that Ted is good at solving puzzles.  What will they find there?

The trio comes across numerous puzzles to solve throughout the story, and there’s mystery, suspense, humor and of course – villains.

And along the way we learn a bit about the internment of Japanese Americans during World War II, including mention of the excellent book, “Farewell to Manzanar”, “The Maltese Falcon”, and the Nisei brigade – the Japanese American unit that served in World War II.  Don’t worry though, the book is pretty sneaky about hiding any educational value in all the fun and excitement.  Kids will never figure it out. I'm sure they won't.

Well, ok, they will, but they'll find it interesting, really, I promise.

As an adult reading this I found the kids, and our narrator Ted in particular, hilarious and quite charming. I lost track of the number of times I laughed out loud.  Even the parents are funny, in that grown up way of being funny because they think they’re funny when really they’re just lame.

I’d put this book in a similar category as “From the Mixed-Up Files of Mrs. Basil E. Frankweiler”, but of course written for the current crop of young people to relate to and enjoy.

The kids’ voices are authentic and quite funny. The story is engaging, with puzzle after puzzle, each like a real life point and click computer game. I think both boys and girls who enjoy mysteries will like this one.

I received a free copy of this book via Netgalley in exchange for an honest review.