Update posted to the end of her Trolls & Negative Reviews blog post:

Please note: Only one of the people shown in these screenshots is known to be a teacher.  I am not.  Although Ms. M. has been, she also is not.

Her utter lack of self-awareness when accusing others of indulging "in behavior worthy of high school bullies" and "acting in such a juvenile manner" is almost deliciously ironic, and flagrantly hypocritical.

She's the bully crying "victim" when her targets refuse to be intimidated.  She is the one functioning in a professional capacity gleefully spewing unprofessional garbage on her author's blog, and author's Facebook page.

Add this to the list of things Ms. Vidal is apparently unaware of: Readers have more of an interest than simply "merits or demerits of the books."  Authors targeting and harassing readers over negative book reviews is an interest to readers and is a valid consumer issue.  YES, readers are going to take note and share with each other about authors that target readers and attempt to intimidate them into removing reviews.

The first two screenshots are of Ms. M.'s reviews and the comments on those reviews (minus those that were deleted for GR TOS violations).

The third link is to a "Discussion" of one of her books. What she fails to mention is that this "Discussion" that is not about the "merits or demerits of the book" was started by one of her supporters, using the name "Soraya". At the time of this screenshot the original post had already been deleted by GoodReads, and the poster had been booted from GoodReads.

Therefore the posts that remain are in response to the original post started by one of her supporters.

I don't have a screenshot of that OP, but I do have the text:

"It is shameful how Mrs. Vidal has been treated by certain trolls on Goodreads and Amazon. Read about it here: http://teaattrianon.blogspot.com/2017.."

Here's the link to her screenshot: https://screenshots.firefox.com/JLDvvI7tR2uVzJpm/www.goodreads.com

In the comments of her blog, Ms. Vidal seems to think a lot of hits to this blog post is a good thing.  She's apparently unaware of how many are checking it out to verify she's really posted the awful things that have been reported, and wait with their popcorn handy for the next bat shit crazy thing she comes up with (good idea to use Proxy Servers when visiting folks!).

She reports 1638 hits to date, and yet has only a handful willing to post in support on her blog and/or on her Facebook page.  Although she also mirrors over on Twitter, and has over 1,000 followers there, she's getting 0 responses, retweets, or likes.

I'm not sure those high numbers are in your favor, Vidal. 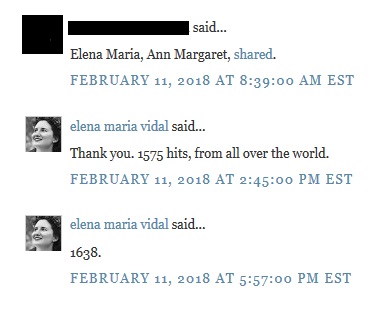 She also cross posted this to her Facebook page: 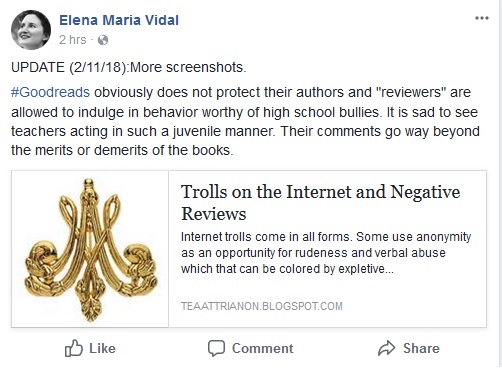